The following article was written by a friend who works as an Early Child Educator in a before and after school program. It is about his participation in the Warhammer School Clubs program, a program by Games Workshop intended to promote the hobby within schools. This article is part two; see part one and part two.

In the last two articles, we unboxed our kit and addressed any concerns that people may have with the Warhammer School Clubs program. Now, it’s time to get ready to get this club going. I decided that, for the size of group that I had and the large variance in age range, there was some modifications I had to make to the official “curriculum” that Games Workshop sent us. This mostly had to do with some of the tools that wouldn’t be harder to use in our program, like allowing the children to use super glue, or using primer (I don’t trust using Abbadon Black base paint as a “primer”, after all).

The plan was to introduce the Warhammer Club to the children after December and the winter break. For the entire Christmas season we were swamped with making gifts, doing charity fundraisers, and putting on holiday plays, so there was little time to go full force into a big project like this. The two week winter break, however, allowed me some time to prepare for the big roll-out so that everything went as smooth as possible.

There were some small moments before the break to get things started with the kids; on the few blizzardy nights in December when there was only one child left in our room late in the evening, I would bring out the models. On those days we had a chance to start piecing the models together. One young man especially was active in helping put the models together.

Some tips on that: be prepared to glue pieces together  Although the First Strike and Storm Strike boxes have the models listed as “snap fit” and thus are theoretically easier for young adults to put together, in our experience some of the snap fit pieces tended to be a little loose. Also, sometimes the kids missed their marks when snipping out the figures from the sprue, which meant that the “snap fit” end didn’t have a connector to go with it.

The models themselves were relatively easy to put together, however.  We had the most trouble with the Space Marines not fitting perfectly and being wobbly or falling apart easily, but the handful of children who helped where able to figure it out. Although the curriculum says to do this with the kids as a workshop day, the reality is that there wouldn’t be enough sprues to go around, so doing them ahead of time with a very limited group of children made it easier and allowed us to have everything prepared for when it was time to get the program up in earnest.

With all the figures put together, I went about organizing them all.  I got three containers from the dollar store, and with fifteen models each they easily fit inside. Being the Christmas season, I had some Ferrero Rocher packaging, which I cut into smaller sections  to make a holder so most of the models would stand up rather then roll around willy-nilly. The only ones that didn’t fit in the Ferrero Rocher packaging were the larger based Stormcast Eternals.

The paints and hobbying material fit in its own box as well.  I went out and got some extra dollar store paint brushes so that everyone would have one, not just the six or so that GW sent us.  Our before and after program serves applesauce for snacks sometimes, so when that happens save and clean out the empty applesauce containers for water pots.  Some cut up clamshell packaging to make little palletes for each kid and it’s the perfect setup for hobbying goodness.

This is where most of the work went into during the winter break. Again, Games Workshop sent Abbadon Black as a “base coat”, without any sort of primer.  While I assume that it was intended to be used for priming, I was concerned that this might be inadequate. Priming without a real primer will most likely lead to a lot of chipped miniatures and a bunch of frustrated kids.   And as much as I would like to spray prime with the children, the limitations of my school, and the fact that it is winter limit my ability. 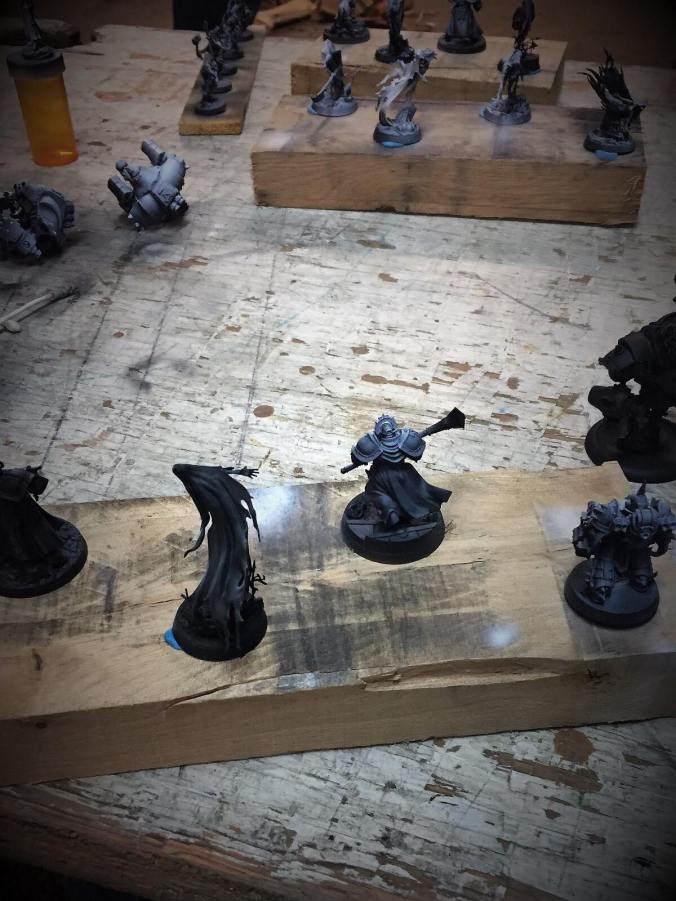 Instead, my family went to Brian’s house, and we used his airbrush to prime everything after Christmas (along with some of my Warmachine collection).  The airbrush we used was a badger Xtreme Patriot 105, and we used badger Stynylrez primer in black and white.  We laid down a black base first covering the entire set of models.

We then started putting on the white, spraying down overtop in the zenithal style. Brian has talked about zenithal before, so I won’t really talk about it too much, but I will say that I think it will help the children differentiate different areas and really pick out details in a way that if the model was all one base colour (black or white) they might miss.

It worked well, though we did run into a few issues when we were spraying the white primer. The black sprayed okay, but on the white, we kept on getting clogging in the nozzle, which probably had to do with the fact that the needle we were using was smaller than recommended for priming.

However frustrating it was finishing up the white, we got it all done.  After a day to cure they were all ready to be packed up and ready for the children to paint. Thanks Brian!

The final pieces to get together was the paperwork. I wrote up a signup sheet and the ‘by-laws’ of the school club, leaving areas blank so that the kids could participate in filling them in. The signup sheet has whether or not the children want to volunteer for a “Student led role”, so those children who want to do something extra know ahead of time that it is an option.

Honestly, although the curriculum calls for making the rules and roles up on paper, I feel like it may be a bit of extra work – the “coach” (ie adult organizer) of the club can simply do all these things, and have it all under their authority rather then bogging the children down in by-law writing. Maybe this is a holdover from school group expectations in the UK, but I don’t know if it’s as applicable in the North American school context, especially for middle/grade schools.

With that all being said, I am excited to have the children be more involved in writing the rules and taking on student lead roles. It’s often been a dream of mine to add a more democratic culture where the kids are engaged in their own learning and development, but that approach is not really one generally found in North America. Maybe this can be a way to start developing the democratic decision making skills with a group of children.

I also wrote a new permission letter to the parents. The GW written letter in BOOK ONE was fine enough, so I mostly copied those words. I did add the date, time and length expectations in the letter though. A lot of our children get picked up early from our after school session, and for those children who do want to participate but also get picked up early, the parents needed to know that they would be required to stay a bit longer than usual on those days.

Another thing I printed out was two sets of references for the game rules for 40K and AoS. Even some adults get lost in the thick of the rules of a rulebook, and while I expect my children to get the ‘how to play’ after a demonstration, they are prone to forget things. So having an easy flowchart or each of the steps of a game condensed into one page will no doubt help them out when it comes time to teach them how to play the game.

Over the past couple weeks, children have signed up and the parents permission have gone out. We have 15 children participating (out of a classroom of 30) with the majority of them volunteering for some sort of student led role within the club! I’m excited to get started, as are the kids. The next post will be about how our first two sessions went.

One thought on “Warhammer School Clubs, Part 3: Setup for Success, OR The Calm Before the Storm”