I paint miniatures almost every day, but one curious thing about my collection is that there are barely any historical figures on my shelf. There are a few reasons for that. For starters, fantasy and steampunk stuff is often straight-up cool. In addition, I like to create my own schemes much more than researching exactly what shade of grey Hugo Boss chose for the uniforms of the SS. Fantasy figures give me the freedom to do this, because no one can tell me that I have the wrong shade of purple on my uniforms. And, of course, when you play fantasy wargames, you end up painting entire armies of fantasy wardollies so you can play the game.

But there’s another reason why I stay away from historical miniatures and wargaming, and it’s one that I’ve discussed with a friend back home a while ago.

At the last CapCon, there were a lot of pretty cool dioramas. Most of these were of a historical nature, representing scenes from world wars, which I didn’t mind until I got to one with the name “last stand” or something like that. In it, you had some Allied and German soldiers in some very close combat. The diorama exuded action, with plenty of the models in very dynamic poses, and was nicely built and painted. Unfortunately, it had a little too much death in it for my tastes — there were one or two soldiers who were falling down dead. Another guy was about to deliver a killing blow to an opposing solider with an entrenching tool, and one poor soldier was modelled with his helmet coming off as he fell to the ground, having just been shot in the face.

While it was technically very well done, and I liked the dynamic poses of the figures, something just didn’t quite sit right with me about it. Looking at it kind of made me a little uncomfortable (which may have been what the artist was going for), and it got me thinking about where I draw the line in my modelling. “I felt then, as I feel now, that the politicians who took us to war should have been given the guns and told to settle their differences themselves, instead of organizing nothing better than legalized mass murder.” – Harry Patch, the last surviving combat solider from WWI.

When I was a kid, I had that sort of child-like wonder at cool pieces of machinery like tanks and military aircraft, and devoured books about the subject. But as I’ve grown a little older, I’ve come to realize that war is nothing short of human tragedy on a massive scale. Many of the young men and women who went off to fight came back blinded, wounded, missing limbs, or completely traumatized, and that’s if they were lucky enough to come back at all. Just try to listen to “The Band Played Waltzing Matilda” without choking up; it’s practically impossible. I wouldn’t say I’m a pacifist, but this past November, I spent a little time thinking about whether I could line someone up in my sights and pull the trigger, and I’m not sure that’s something I am capable of.

At least, I’d like to think so. Throw me in the hell that is the trenches for a few weeks, and perhaps I would get so desensitized to the slaughter that my attitude may change.

There’s just something about doing dioramas about the throes of combat or painting historical military figures engaging in battle, that just doesn’t quite sit well with me. It’s hard to articulate, but I’m not sure I want to spend hours poring over, or have sitting on my shelf to look at, a diorama of a bunch of young Tommies going over the top and getting mowed down by machine gun fire.

Even if it is simply a soldier out of combat, it can be hard to look at knowing that he’s likely to be sent off to the front and end up killed or wounded. And this is before we get into the sort of sticky issues surrounding modelling the people who murdered entire families in the gas chambers and the Panzers that stormed through most of Europe to enable them to do so.

Blood for the blood god!

On the other hand, fantasy stuff doesn’t give me that same reaction. I can load up as much blood as I want on the chainsaw bayonet on my steam-suited character’s grenade launcher, and it doesn’t have the same impact. I think it’s because everything in the setting is so cartoonishly ridiculous that it doesn’t remind me of any particularly gruesome historical period. A pile of Orc skulls somehow doesn’t quite disturb me as much as seeing Tommy or Fritz face down in a pool of mud and blood because orcs aren’t real. 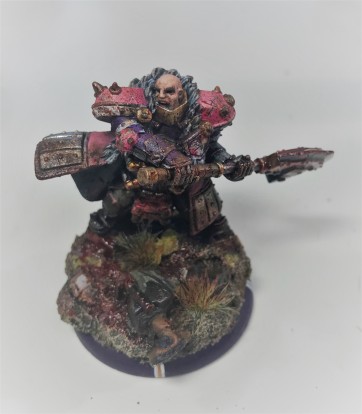 For example, my Butcher model from Warmachine is ridiculously over the top. Blood splatters, body parts, and a guy cut in half on the base. However, it’s the Butcher — the craziest, most murderous character in the Iron Kingdoms, which is itself an insanely ridiculous and absurdly violent setting. The model itself is absurd; he’s carrying a boiler around on his back, right next to some presumably flammable or at least badly singed fur. His proportions make him look like he’s suffering from gigantism, his axe is too heavy for anyone to swing, and wearing those shoulder pads in actual combat is just straight-up insane. On top of all of that, he’s painted in bright purple and pink. Everything about him is so ridiculously over the top that slathering on more blood than a Quentin Tarantino movie doesn’t have quite the same effect.

I realize that most people who model historical stuff don’t do it to glamourize or fetishize war, and many of them have deep connections to some of the stuff they model — maybe that Lancaster was from their father’s squadron, or perhaps their grandpa served on that ship. But for me as someone who does primarily figures, it can be a little much, especially if we’re talking figures where I have to paint the whites of someone’s eyes as he draws his last breath.

So, I probably won’t be doing a lot of historical military figures anytime soon, not unless I spot a representation of a historical figure who really interests me such as Billy Bishop or Lidya Litvyak. As for historical wargaming, I feel like I can safely write off just about any game where someone has to play the Nazis, so there’s not likely to be any Flames of War or Bolt Action for me.

A little while ago, I saw a picture on facebook of an award-winning diorama of the crash of SAS Flight 751. The diorama was technically very well done, and was an impressive feat of modelling. However, some people in the comments were expressing discomfort with the subject matter, because of all the death and destruction surrounding the site of a plane crash. At least, they were, until it was pointed out that thanks to some impressive airmanship and a bit of luck, everyone was able to walk away from the crash with only a couple serious injuries.

For just about everyone, I would wager there is a personal limit to the subjects they are willing to work on, and some things that they may find to be just too uncomfortable to represent in miniature. I’ve drawn my own line, and I know it may be logically inconsistent for me to be squeamish about combat scenes while pouring a whole pot of Blood for the Blood God over a space marine, but it’s what I’m comfortable with.

2 thoughts on “How real is too real?”