And now we get to the important part of the new year’s festivities: seeing how far I’ve come in hobbying over the past year, and figuring out where to go from here.

Last year was a good year for me. I’ve put a lot of work into learning how to properly highlight a miniature, wet blending, colour theory, freehand, weathering, and true metallic metals, and I think it really shows. Take a look at the difference between my two Grolars, and you can really see the difference, especially on the metallics and weathering.

I made a few resolutions last year; of course, I didn’t write them down, so I’m going by memory. From what I recall, my goals were:

Use a wet palette

Honestly, I don’t know why I needed to make a resolution in order to motivate myself to do this. It takes like five minutes to make one out of stuff you probably have at home, and it is a tool that very quickly made for a measurable improvement in my painting. Being able to keep my paints hydrated throughout a painting session has enabled me to really work with techniques such as wet blending and painting faces.

This one took me until November; after going to CapCon 2017 and hanging out with some of the people from the local IPMS group, I was motivated to finally finish a PZL P.11 that had been kicking around on my to do pile for a while. It felt good to finish something, and I have a P.23 in 1/72 and a P-40E in 1/144 scale on deck for the next time I need a little palate cleanser from figures. 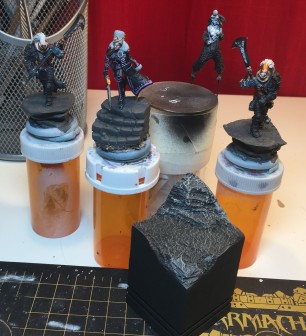 At least I got the plinth done…

Most of my pieces so far have been primarily for gaming. Even if they aren’t something that I’m going to bring to the game store very often, I’ve been using the proper, round-lipped Privateer Press bases with arc markings. This has been in part motivated by a desire to both play it painted and keep up with the Joneses, so while it has been good to build up my skills on my army, I haven’t yet done much which is purely a demonstration of my painting skills. However, I did do a couple miniatures as Christmas presents this year, and I do have something in progress, so I will say I’m about halfway there.

So, two and a half out of three isn’t bad for last year’s resolutions.

This year, I’m going to make some rules for my resolutions. Like with any goal, it is best if it is specific and measurable. If the goal is something too simple like “get better at X,” then it’s practically meaningless. Also, when it comes to hobbying, I feel like your skills tend to grow in spurts, with each spurt coinciding with when you go out of your comfort zone and focus on learning new techniques.

Also, I feel that resolutions should not be competitive. I could make a resolution to win a best painted award, but I feel that a lot of the time, a first place ribbon tells you just as much about who else showed up that day than it does your hobby skills on display. Though, in the case of an open system judging, it would be nice to take home a silver this year for something.

So, with that said, here are my resolutions:

I have a couple diorama ideas floating around in my head, but with all the army painting I’ve been doing to build my skills and get painted models on the table, I hadn’t gotten around to them yet. Again, I’ve been focusing a lot on painting my army, and while I am painting it up to a very high standard and using it to build my skills, that means that I haven’t really put aside the time to hop into a diorama. I got a lot of tips at the Ottawa Figure Show this year on composition and groundwork, so I am looking forward to trying my hand at that.

Do a piece in non-metallic metal 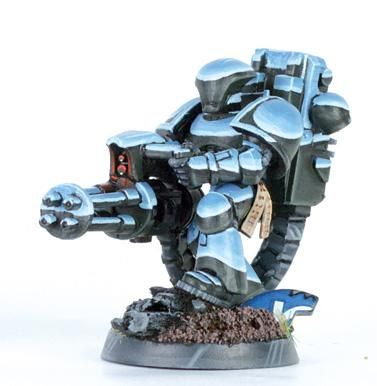 Non-metallic metal, the practice of rendering metallic objects with the use of non-metallic paints, carefully rendered to show the interaction of the light with the metallic reflections, is a technique that I really want to make a good effort at in 2018. I feel like I’ve made a lot of progress on my metals by applying true metallic metal techniques to my work. While I may end up sticking to TMM in the end, I feel like learning how to do NMM will help me understand light and how to capture the interactions between light, shadow and reflection in a smaller scale.

Try out glazes and sketch style

“Sketch style,” the technique of doing zenithal priming and a value sketch then applying glazes in a sort of paint-by-numbers technique seemed to blow up in the first half of this year. It seemed like I couldn’t browse through any painting group on facebook without people asking questions about or showing off their sketch style creations. This was a technique I hadn’t really tried, partly because of inertia and partly out of concern that it might be hard to get either vibrant, saturated colours or really apply colour theory to the shadows and highlights.

Anyways, I’ve played around with inks a fair bit recently, and I think it’s about time I start doing so in a bit more deliberate of a manner. I’ve got plenty of beasts and minions and other organic creatures that I think would be a lot easier to do with a sketch style approach than traditional painting, so I’m sure some of those are going to end up being guinea pigs for these experiments.

End the year with fewer unpainted miniatures than I started with

This might be trickiest one. There is something about buying more plasticrack that offers the purchaser a quick rush of endorphines. Unfortunately, that means that I tend to accumulate minitures as fast as I can paint them, if not faster. My stash isn’t completely out of control, but I would like to reduce both the number of models in my stash and the number of assembled, unpainted miniatures on my shelf of shame.

When I started this blog, the idea behind it was to catalogue my progress and use it as a tool for sharing my knowledge. I’m probably not going to end up being one of those minor internet celebrities like Menoth John or the guy from Tabletop Minions. Especially not if I stick to the written word rather than get into the world of podcasting or video. But I would still like to keep it going, and keep putting out semi-regular content, if only to keep this catalogue going and hopefully help some people with their painting progress.

When it comes to miniature painting, one of the best ways to get better is to set goals and practice towards them. There is a wealth of information and guides out there on the internet, and with some study, practice, and a bit of luck, 2018 is going to be a good year for my progression as a painter.

So, what’s your goals for your hobby progression in 2018? Let me know in the comments!