Khador is a faction blessed with a lot of interesting infantry models, from our stealthy Kayazys and redneck Kossites to our heavily-armoured Iron Fangs and Man-O-War. Many of them exude the strength of the motherland, but there is perhaps none that typifies Khador more than the humble Winter Guard Mortar Crew.

The Winter Guard are Khador’s mass conscript infantry, going into battle with little more than basic armour and mass-produced cheap weapons.  They make up for thiswith their bravery and resilience; Kovnik Jozef Grigorivich can grant them the Tough special rule, and in their theme force, they are willing to sacrifice their very lives for Khador, taking bullets meant for warcasters.  The Mortar Crew, perhaps, typifies the Khadoran attitude towards problem-solving more than any other.  While our engineers haven’t quite perfected an accurate mobile light artillery piece that can reliably score hits, they’ve decided that that doesn’t matter so long as it can deliver a lot of high explosive into the general vicinity of the enemies of the motherland.  And, of course, they have the ubiquitous handaxe, which gives them a plan B against anyone who makes it behind the lines to their position.

With that in mind, I figured it was time to get started on my second Mortar Crew.  This unit consists of two models; the mortar itself, and a second crewman with a telescope who serves as a spotter.  They are the old metal models, so a file helps for cleaning mold lines.  Also, when assembling the mortar, I’ve found that it goes together a bit better if you make a small hill out of green stuff to place the mortar itself on, such that it is elevated slightly above the guy firing it. 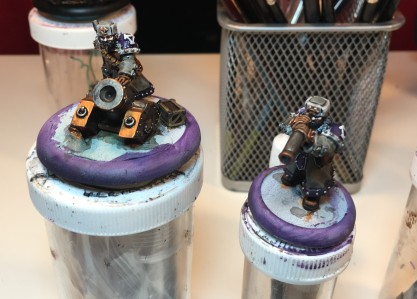 From then on, it was a matter of painting it up in my usual Winter Guard theme.  Grey coats, brass armour, and purple shoulder pads, which various straps, buckles, pouches, and other bits painted in appropriate colours.  The mortar itself was mostly brass and silver, with enough of each that they would complement each other and balance out, and a bit of wood-grain on the frame.

Since this was my second mortar crew, I decided to do a little freehand on the shoulder pad to distinguish it.  For a symbol to distinguish them from their Winter Guard brethren, I borrowed the NATO symbol for a mortar crew., and for this second unit, I freehanded on a roman numeral II and a couple of random shapes that look vaguely like Khadoran runes.

Then, we get to the basing.  I’ve gone with an autumnal theme for most of my army, because I feel like it contrasts the purple of my warjacks, and is a little different than the green grass and trees you see all the time in wargaming.  The first step is applying some texture.  You can use glue and sand for this, but lately I’ve found that I much prefer to use artist mediums with pumice aggregate mixed in with craft paint.  I find it to be easier to sculpt a little to add some variation to the base, but more importantly, it’s a lot less messy and I’m not vacuuming sand out of my apartment for a week. 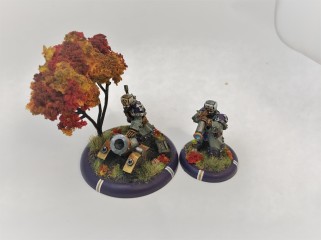 Because I put a tree on the base, this means I always have concealment, right?

Give it a wash and drybrush, add a bit of turf and flock, and a couple tufts, and we’re just about done.  The catch is, in this case, I want to go a little further and add a tree to my base.  No problem!  I have some tree armatures from Woodland scenics that just need some cleaning up, priming, and a little paint to make the branch structure of the tree. From then on, it’s just a matter of gluing on some clump foliage, and then dabbing on some washes such as a sepia or an Athonian Camoshade to take the brightness down a bit.

That said, while I like these trees on my models, I realize that that I still have some ways to go on them.  I’m not sure clump foliage quite works at the 28mm-ish scale that games like Warmachine are played at, as it doesn’t quite give the impression of actual leaves. Further, the canopy of this tree ends up being way too thick, not letting even a crack of daylight through in between the leaves.  I will be experimenting more before I do any display-quality models with trees and leaves, but I do think this is fine for now for gaming pieces and to bang out some terrain so that the 40K players don’t make fun of us as much for having tables that look like crap.

Even if it isn’t perfect, I still think this Mortar Crew shows a lot of progress.  Here, I’ve got it next to one that I painted over a year ago, while I was still getting into the hobby.  Since then, I’ve learned a lot about basing and highlighting, and have tried to push my tabletop standard higher and higher, and I think the difference between last year’s job, with not much highlighting aside from some dry-brushing and minimal edge-highlighting speaks for itself.  The newer piece just “pops” more, which is a testament to how much difference some highlights can make, even on tabletop pieces. 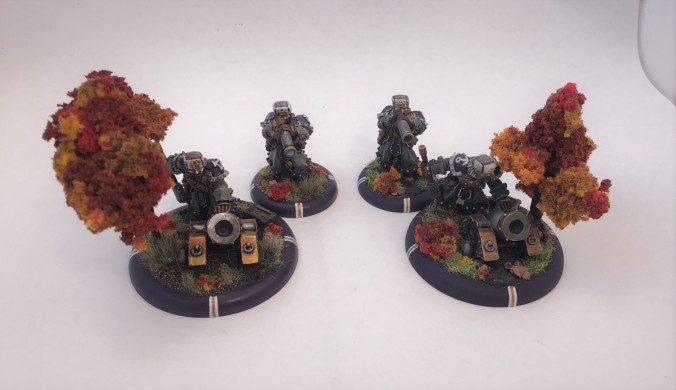 Note the blue lens on the telescope, and the more interesting base work on the new one on the left. 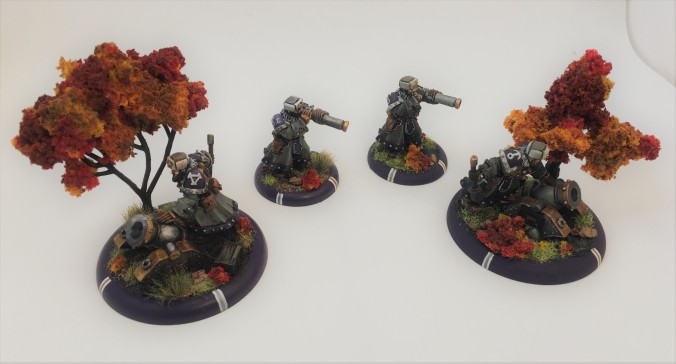 You can clearly see how the highlights on the body of the mortar on the left give it a little more volume and shape to it than the flat silver on the right; I probably simply gave it a wash and maybe a quick drybrush a year ago, and now, I’m starting with a very dark silver and highlighting up to something brighter.  On the telescopes as well, you can see the difference that the TMM makes. 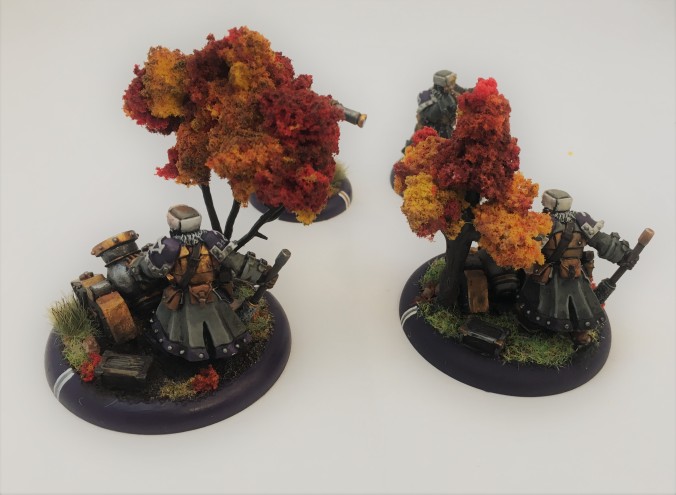 So, now that I have two Mortar Crews, I have to think of a list to go with them.  They are available in the Winter Guard Kommand theme force along with every other Winter Guard model, so playing in theme is an obvious choice.  As for a caster, plenty of possibilities spring to mind, but there is one in particular that stands out above all others.  It has been a long time, too long in fact, since I have fielded her, but one can only resist the siren’s call that is Kommander Sorscha for so long. 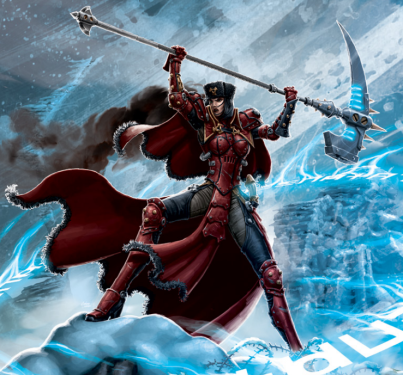 Fun fact:  Khadoran wardrobe engineers have found that high heels dig into the surface of snow and ice, preventing soldiers from losing their footing.  Why they’ve only been issued to female soldiers, however, remains a mystery.

Like many Khador players, Kommander Sorscha or Sorscha1 was my first warcaster. She has a number of ways to freeze enemy models, and her Wind Rush spell, which grants her a free full advance, makes her beautifully mobile. Additionally, Fog of War can help push the DEF of your army up just enough to give them the help they need to get up the field.

Between Freezing Grip and her feat, both powerful effects that can freeze entire swaths of an enemy army, it’s no wonder that Sorscha1 gets the nickname “the ice queen.”  Of course, one of the side benefits of having your opponent frozen in a block of ice is that it drops their DEF down to 5, which means that a Mortar Crew, with its effective RAT of 1, can actually hit things! This makes it a great tool for following up on a bunch of frozen infantry, or perhaps getting those last few hit points in on an enemy caster during an assassination attempt.

Basically, the point of this list is simple — I freeze stuff, and then stuff that normally can’t hit the broad side of a barn actually can.  Both Victor and the Mortar Crews suffer from the inaccurate special rule, which lowers their RAT to an utterly pathetic level.  Sorscha fixes that by freezing her enemies, bringing their DEF down to 5 so they can actually hit things.  With Victor, you can actually have the hilarious situation of watching your enemies get frozen in a block of ice and subsequently burn to death with an incendiary shot.  The Grolar, as well, is a warjack with a really good gun, but with a RAT of 4, it’s hard to actually hit things with it, a problem that Sorscha fixes.

Hmmmmmm… looks like I know what I’m playing on Tuesday…