So, one of the things on the Warmachine internet that sometimes irritates me is how the moment something drops, we immediately get a whole bunch of hot takes and theorymachine, which immediately fills the echo chamber and becomes commonly accepted wisdom without any rigorous testing or any effort to really unlock what’s there. Sometimes these “hot takes” turn out to be accurate, but sometimes… well, remember how people said that Caine3 or Ghost Fleet were unplayable trash when they came out, and then all of the sudden Tim Banky won everything?

That said, now that I’m on the Warmachine internet and happen to be a loyal Khador player, I am now required by the Empress to offer you my hot take on today’s Insider, which is all about our Man-O-War, even though what I really really want to see is an Assault Kommando theme.  And a Vlad3 all the horses theme.  And Harkevich2… okay, now I’m getting greedy.

However, I will preface this by saying that I am, in fact, an idiot who is not very good at this game.  At the SOO this year, I managed to eke out a 1-4 record in whichever tournament actually required painted models.  A few weeks ago at the CCBB, I was knocked out of contention in something like 11 minutes, and more importantly, I got crushed in the painting competition by Will from Moosemachine.  Again.  Not that I’m bitter or anything…

For a long time, Man-O-War were the unit that Khador players really wanted to love. Big burly men and women of Khador in giant steam-powered suits of armour, wielding either giant axes, giant hammers or grenade launchers with freaking chainsaws for bayonets, we all had the dream of crushing our opponents with an unstoppable tide of steam and steel, even if the models themselves bore an unfortunate resemblance to GW’s Space Marines if you squint a little too hard.  Unfortunately, throughout Mk.II, they were generally too slow to get to where they needed to be and didn’t really do what they needed to do when they got there, so you didn’t really see them all that much on the competitive circuit. While Mk.III brought the Shocktroopers up to a decent baseline with the release of the Officer, they were quickly overtaken by the rise of themes (aside from the Loud Chris Vlad2 list).

Today, with the sneak preview of the Armored Korps theme and some new models, we can see that starting to change. Armored Korps lets you take all the Man-O-War, Battle Mechaniks, our trusty War Dog, and a merc solo or unit.  The benefits are free models, better Repair on mechaniks, and Advance Move on models that don’t exist yet.

Okay, at first glance, nothing in is either unexpected or is anything to really write home about.  Free points is standard for themes and probably what we all expected, better mechaniks are good, I guess, but it just feels like between electroleaps, blast damage, and sprays, there are enough ways to trivially kill mechaniks that I can’t see this being gamebreaking.  And the final benefit is something that we aren’t going to see until 2018 when they start releasing the new models.

Speaking of new models, though, this is the real meat of the insider.  Bombardiers are going to get some CID love with a proposal to increase their range.  Further, they will be getting an officer which grants them some neat special rules, such as Clear Cut, Quick Work, and a Dual Shot minifeat.  This will hopefully make them as cool on the tabletop as “heavily armoured Russians wielding chainsaw-RPGs” sounds.  We’re getting a battle engine which kind of reminds me of the Gun Carriage and which, with Advance Move in theme, seems pretty legit.  Finally, we’re going to be getting Man-O-War Tankers, which it is safe to assume is a new name for the Heavy Man-O-War whose sculpts were spoiled at Lock and Load

But when it comes to recent Man-O-War news, that’s not all!  In the most recent issue of No Quarter, the splash page showed off what is clearly Sorscha3 in a Man-O-War suit**, as well as a couple cool-looking MoW solos. With the hint in the insider that there is more to come, I don’t think it is too much of a stretch to say that the Demolition Corps are at some point going to get some much-needed help in the form of a Unit Attachment or Solo — perhaps they might get backswing back or something to that effect?

So, how do I feel about this theme overall?  I think it seems pretty good, but I’m not sensing anything at the moment that is going to light the world on fire — at least, not until we start getting a good look at the new Man-O-War releases slated for 2018.  The big thing that this has going for it is that it enables one to create a bricky Khador army that can actually score circular zones, as SR2017 and some boogeymen in the meta (Cryxian armour debuffing, POW 20-something Skin and Moans that chew through anything they get into) seem to be taking the shine off some of our jackspams.  A couple units of Man-O-War and a couple jacks in the battlegroup can score in some scenarios a lot better than an all-jack army whose only scoring piece for some zones is the caster.

As for what casters to take it with, I think Vlad2 is an obvious candidate because between Hand of Fate and his feat, he can turn a unit of MoW up to 11.  Will Pagani offered up a Butcher1 list in the Insider which seems solid.  Strakhov2 will surely be hilarious when you tell your opponent that your shocktroopers are ARM 26 with no-knockdown tough on feat turn, though casting Last Stand on a unit with relatively expensive models seems to be an iffy proposition.  The Irusks are always good at running infantry, and with Irusk2, it could be fun to throw Fire For Effect onto a Bombardier and drop a fully-boosted arcing fire 6-man CRA onto someone (and of course, managing to triple-snake the attack roll because you have somehow angered the dice gods). Of course, Sorscha3 is undoubtedly going to be badass when she comes out.  And even Lord Kozlov, our much-maligned battlebox caster, may get a new lease on life with a mob of Shocktroopers.

It’s totally not weird that I put in the effort to make a gender-bent conversion of Kozlov, out of Nicia and a random Iron Fang cape, right?

Kozlov gets a lot of hate online for being kind of boring and not being number one at anything in particular, but I chose her because she’s got two solid upkeep spells for Man-O-War, and her feat synergizes quite nicely with Shocktroopers.  +2 SPD brings them up to a whopping 13″ threat range with the Kovnik, and Unyielding is not too shabby on a no-knockdown ARM-skewy unit with 2″ reach.  Forge Seers can help fuel the jacks when Kozlov is spending all her focus on her upkeeps, as well as take care of any pesky Gremlin Swarms.  Saxon Orrik is an obvious choice for a mercenary solo because he grants pathfinder, and the last thing MoW want is to be slowed down even more by rough terrain.

As for the battlegroup, if journeyman league games have taught me anything, it is that casting Fury on a Juggernaut is fun.  And the Spriggan is there because I just finished painting it, and despite being kind of expensive in terms of point cost, it at least has some synergy with Kozlov’s feat for the same reasons as the Shocktroopers.

So, final verdict?  It’s really too early to tell, given that the theme force includes a lot of unreleased models, but let’s just say that I’m probably going to be taking out the airbrush next weekend… 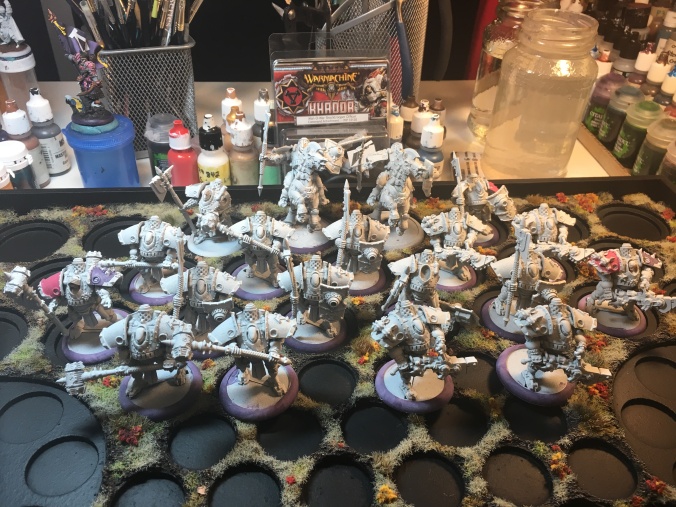 **Sorscha3 in a Man-O-War suit is the most awesome thing that has happened in Khador in a long time, and anyone who has a problem with it is an idiot.